The Real Estate Board of Greater Vancouver (REBGV) reports that residential property sales in Greater Vancouver reached 1,797 on the Multiple Listing Service® (MLS®) in February 2013. This represents a 29.4 percent decrease compared to the 2,545 sales recorded in February 2012, and a 33 percent increase compared to the 1,351 sales in January 2012.

Last month’s sales were the second lowest February total in the region since 2001 and 30.9 percent below the 10-year sales average for the month.

“Sales in February followed recent trends and were below seasonal averages, though our members tell us they saw more traffic at open houses last month compared to the previous six to eight months, said Eugen Klein, REBGV president.

The sales-to-active-listings ratio currently sits at 12.2 percent in Greater Vancouver, a two percent increase from last month. This is the first time this ratio has been above 11 percent since June 2012.

“With a two-point increase in our sales to active listings ratio and a reduction in the average number of days it’s taking to sell a home, February showed some subtle indications of a changing sentiment in the marketplace compared to recent months,” Klein said.

Since reaching a peak in May of $625,100, the MLS® Home Price Index composite benchmark price for all residential properties in Greater Vancouver has declined 5.6 percent to $590,400. This represents a 3.3 percent decline compared to this time last year. 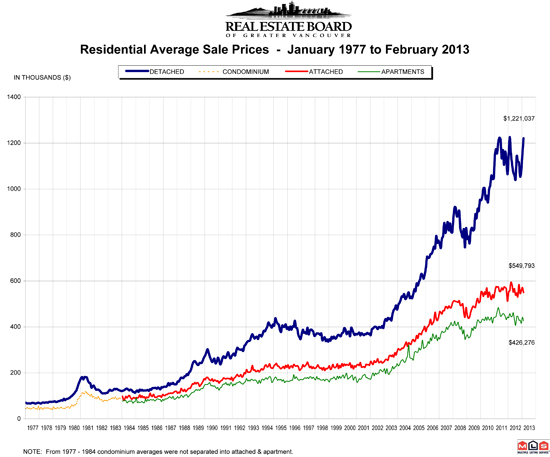 This entry was posted on March 4th, 2013 | Posted in Market Report